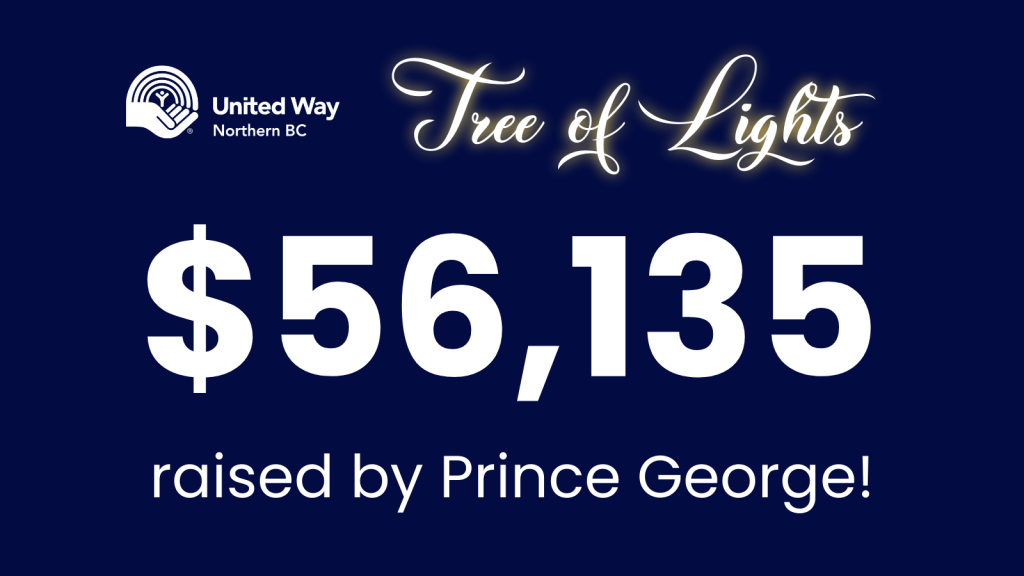 Prince George, BC – The United Way Tree of Lights campaign in Prince George has come to a close, and we are thrilled to announce that we have raised a total of $56,135 towards our goal of $85,000.

This year’s campaign was particularly challenging due to the ongoing effects of the pandemic and a tough economy. Despite these obstacles, we are grateful to the community for their generosity and support in helping to raise funds for social service programming in Prince George.

The United Way Tree of Lights is a beloved holiday tradition in Prince George, and involves the lighting of an approximately 60ft tree in the heart of the city atop Coast Prince George Hotel by APA. The tree is a symbol of hope and togetherness for thousands of people in the community.

We would like to extend a special thank you to the campaign’s star sponsor, Canfor and Canfor Pulp, for their invaluable support in bringing joy and hope to the people of Prince George during the holiday season. Their contributions have played a critical role in the success of this year’s campaign.

We are deeply grateful to everyone who donated their time, money, and efforts to make this year’s United Way Tree of Lights campaign a success. Your generosity and support is what makes this holiday tradition possible, and we hope to continue to bring joy and hope to the people of Prince George for many years to come.

Thank you for helping to make a difference in the lives of those in need.

The list of contributors to the campaign is long, but the Tree of Lights would not have been possible without this year’s title sponsors, Canfor and Canfor Pulp.

UNITED WAY TREE OF LIGHTS CAMPAIGN IN PRINCE GEORGE CLOSES WITH JUST OVER $56,000 IN FUNDS RAISED

THE UNITED WAY TREE OF LIGHTS BRINGS HOPE TO THOSE IN NEED!

arshpreetUNITED WAY TREE OF LIGHTS CAMPAIGN IN PRINCE GEORGE CLOSES WITH JUST OVER $56,000 IN FUNDS RAISED01.10.2023